In September 2015, friends and artists Quentin Ball, Jean Davey Winter, Mary Pritchard and Tony Wallis went on a journey. Starting in Salt Lake City, Utah, they looped back through Idaho, Montana and Wyoming. The trip took them close to the Canadian border, through the northern parts of the Rocky Mountains and to several US national parks including Yellowstone and Glacier.  What each of them took creatively from their trip is now presented collectively at the Hastings Art Forum as: 'Four States, Four Minds: An American Journey'.

The exhibition of photography, mixed media and ceramic shows landscape as geology, chemistry, beauty, infinity and power. It also reveals a stillness and a perspective that tends to evaporate in the daily chaos of being human.

The work of the four artists is arranged across the two spaces at the Hastings Art Forum. This enables both a balance of mediums and an appreciation of the different aspects of their responses to the journey.  Mary Pritchard’s photography, for example, takes two very distinct forms. In the first gallery images are arranged in loosely sequential, multiple panels that convey movement through a landscape at speed. By contrast, her photographs in the second gallery space are largely monochromatic studies in which almost nothing moves at all. These hushed intersections of woods, water and cloud radiate the quietness and coolness of an autumn dusk.

Mary Pritchard also works with ceramics and artist books. I had to leave before these were fully unpacked so I only got a glimpse of one ceramic piece inspired by the contours of the mountains.  The shapes and wild splashes of colour in these pieces is quite extraordinary and suggests the cataclysmic natural cycles that formed these ranges in the first place. 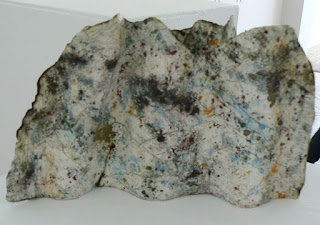 Formation is very evident in Jean Davey Winter’s work at the other end of the gallery. Her fantastic series of nine small paintings really do look as if they might have been cooling for a few million years. The textures and colours invoke the raw ingredients of mountainous terrain – granites, limestones, sandstones and melded heavy metals.

Such textural depth and tonal earthiness is complemented perfectly by her series of photographs in the other gallery space. These pieces also suggest extreme chemical processes at work but they emerge from the geo-thermal riot of colour that is Yellowstone National Park.  Once more arranging the primary piece in a block of nine, Jean Davey Winter has taken a constantly turbulent and often toxic process and frozen it into a moment of still and surreal beauty. 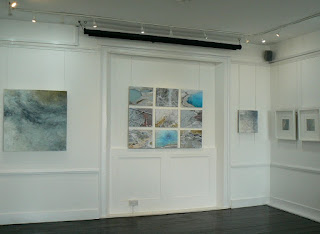 Stillness and beauty, and the literal and metaphorical journeys undertaken to find it, are a significant presence in this exhibition. The physical realities of the journey and how that journey is facilitated, however, is most encapsulated in the work of Quentin Ball, particularly in the ‘Across Roads’ project.

The Rocky Mountains cut through Montana, Wyoming, New Mexico and Colorado forming a 3000 mile watershed which splits rainfall to the Pacific on the west, and to the Gulf of Mexico and Hudson Bay on the east. Whenever westward migration occurred in the US, the ‘Great Divide’ had to be crossed.  Its significance in American history and culture is therefore huge.

The ‘Across Roads’ project is Quentin Ball’s response to this. He photographed locations where highways intersect the invisible ‘Great Divide’ thus capturing physical facts that cannot possibly convey the enormity of what they represent. What is displayed here is a panorama of the fourteen intersections that lead across the ‘Great Divide’ just from the state of Montana. Implicit in this project is an acknowledgment of those who have beaten paths through impossible odds. Although no person is visible in these photographs, they are present in the evidence of journeys made, signs erected and routes laid. 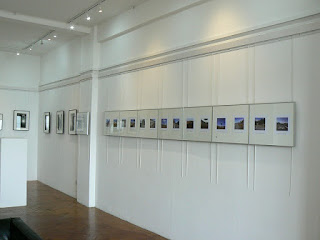 The photographs of Tony Wallis cover a wide range of compositional style and subject including landscape, its abstracted features, expansive skies, singular buildings and one perfect soliloquy of reflective balance. However, it is only in his photographs that any real human presence is found .

His people inhabit their landscapes gently and naturally – both incidental and integral at the same time.  There’s a woman sitting by the lake. There’s a car in the distance. Someone built a house that looks like it just grew out of the earth but nobody seems to be home. The church in the middle of nowhere might be abandoned. A homestead is a speck in the fantastical dominance of the dramatic sky around it. You can’t always see the people in these photographs but you know that they are there. 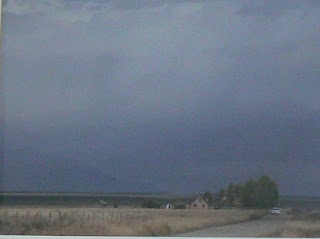 I love this show. I love the images of landscapes so vast that they become abstractions, alongside images of the same landscapes so detailed that they become equal abstractions. The delicate presence of humanity is a reminder that we all exist somewhere in the messy middle of these two polar abstractions and need each other to make paths. It is also a reminder of the catharsis that can come from just being present in something so huge, timeless and resilient.

In Memoriam
Two months ago Tony Wallis died of cancer. At the time of the trip nobody could have known. 'Four States, Four Minds' is therefore a very special, if sad memorial to Tony and to his work.

The SoCo Artists Showcase, which has just opened at the Hastings Art Forum is a wide ranging exhibition with works of drama, beauty, intrigue and fear.

Curated by Jean Davey Winter, Jenny Painter and Roz Cran, the show has paint, print, etching, textile and installation works from 11 artists and features wax, perspex, compost, aluminium, wool and some materials I can't identify with any certainty. 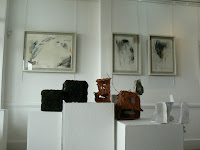 Standing on the right as you enter, Sarah Heenan's interlocking sculptural geometry is so huge it actually alters your perception of the whole gallery space. On the opposite side are Helen Scalway's models which may share a theme but are made of materials so different that each is its own little mystery.  Nicely juxtaposed on the wall behind, Sally Cole's fluid painting seems barely contained within its frame.

Fluidity also distinguishes Stephanie Fawbert's five large portraits of children that gaze straight at you with a child's directness as you walk into the second gallery space. All of these atmospheric works have the appearance of being unfinished yet each is a very clearly defined and complete character. 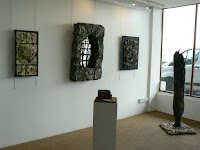 From a distance Heather Collins' sculptural pieces look like they have been picked up on the beach and carried into the gallery.  The hard and weathered look of rust, shells, barnacles and seaweed strands on ancient driftwood is so intense you can almost smell it. As you get closer it's hard to believe that these textures and effects all emerge from soft materials and incredibly detailed, complex and colourful stitch work. 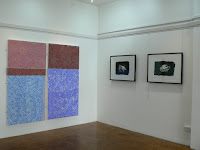 The use of colour and intricately laced pattern in Kathleen Mullaniff's work is subtle and beautiful and being positioned between the silvery and monochromatic themes of John Booth enhances the work of both. Booth's etchings, some on aluminium and others on paper, are precisely executed and reassuringly matter of fact in their communication of mortality and human darkness. 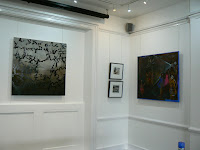 This darkness turns to fear in the splashed blood red of Angie Braven's three pieces that leave no doubt at all about the visceral horror of female genital mutilation.

Much of the work in this show, however, is characterised by limited use of colour or muted abstractions of it and these subtleties flow gently in and out of each other as you wander around the gallery space. 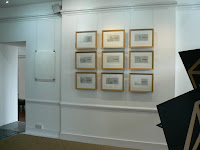 John Hacker's earthy tones in perspex cases suggest Babylonian tablets. The quartet of drawings beside them pulls you into a delicate harmony of greys.  Anny Evason's abstracted and minimal landscapes dance before your eyes and there is an ethereal quality to Maggie Henton's group of nine text and graphic prints on the theme of the shipping forecast and potential loss at sea.

This is my first SoCo Showcase and it's a fascinating and enjoyable introduction to the work of this group. However, there are actually more than 50 individual pieces of art in this show so it's impossible to convey the full scope of it here. It just has to be seen.

SoCo Showcase at the Hastings Art Forum is on now until June 26th.

For interviews with the artists please see the SoCo blog
Posted by Nature Strikes Back at 12:21:00 2 comments: