When I was 18 my ambition was to teach in a prison. I was smart and it seemed like a perfectly natural path for me to follow at that time. All I had to do was get the grades to put me into the right university for the course. I flunked.

35 years later and now an artist, I am reminded of that ambition as I find myself looking at an exhibition of art and poetry by people on death row in San Quentin prison.
The exhibition is being shown at Sun Pier House a community arts centre and cafe in Chatham. The cafe area is large, calm and light with panoramic windows. The artworks and the writing sit naturally in the spaces between bookshelves, cabinets, objects, sofas, tables and people. Outside the swans float over the sparkling, rippling water of the bay with the cranes from the old shipyard in the distance. It's a beautiful day. I start to look at the words and pictures on the wall while waiting for my coffee. By the time it comes I have already been moved to tears twice.

I see a lot of art. Art with ridiculous price tags. Art about art. Art that thinks its politics. Trending art. Art that tells you exactly what you’re supposed to feel about it. Art that's really not art at all. I see a lot of shit claiming to be gold and even gold claiming to be shit because that's the joke the audience believe it's in on. Then there's art as asset, moved like currency between members of a very small club. It has all become rather unreal as if art does not belong to artists anymore. It no longer communicates the fundamental and transformative need for a safe space in which you can talk to yourself about what it's like to be human.

In these truly crazy and fragmented times it is becoming harder to hang onto the belief that there even is a universal, let alone reflective, human experience. But here in these paintings, drawings, poems and writings there is no doubt about it at all. There may be a beginning and an end but it is really that journey in between that ultimately defines us all as human. Not where we've been. Not what we own. Not what we look like. And certainly not how we die. 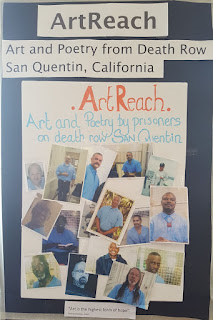 I discovered this exhibition and ArtReach while doing research for my own online project about death and dying.  ArtReach is a charity set up and run by UK artist Nicola White. In 2010 Nicola began corresponding with a death row artist via the Lifelines organisation. She visited San Quentin in 2015. From this visit ArtReach emerged and has now organised several exhibitions of death row artists and writers.

Articles and Reviews
BBC News video report about the exhibition

Reaching out with art from death row in San Quentin,California
The death row inmates who turn to art:‘We should be willing to listen to what they have to say'.